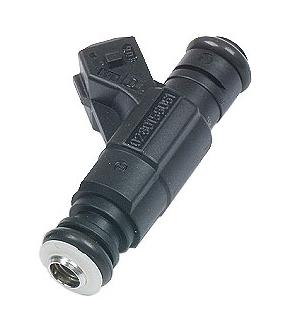 Some of these characteristics are determined by the engine management, including both the tune as well as the electrical configuration of the injector driver circuit and wiring harness. Others are based on physical properties of the engine, such as the cylinder head port design, the intake manifold and fuel rail (if applicable) design, the intake valve configuration, and the type of fuel delivery system being used.

Since we work solely on Volkswagen and Audi vehicles, some of the information will focus on these applications, and is generally related to port injected engines (rather than direct injected) engines available in these makes. However, the information can be easily applied to other makes and models, as well as other fuel injection configurations. This information is for electronic fuel injection systems and does not apply to Jetronic (CIS) mechanical fuel injection.

Flow Rate
Flow rate is the most important factor to consider when selecting a fuel injector. EFI tunes are written for a specific injector flow rate and, generally, the fuel injector should match this. The flow rate is a measure of how much fuel an injector will spray at a 100% duty cycle (wide open) at a specific base fuel pressure. Most fuel injector flow ratings are measured at a base fuel pressure of 3 bar (43.5psi) and have the units of cc/min (cubic centimeters or milliliters per minute) in SI/metric units or lb/hour (pounds per hour) in english units. One pound/hour is about 10.5 cc/minute (440 cc/min = 42 lb/hr). It is possible to use a different injector size than the fueling map was written for by changing the fuel pressure, but, keep in mind, this is not a linear relationship, so you won’t see 33% more flow at a fuel pressure of 4 bar. There are a wide variety of fuel injector calculators available on the web if you intend to adjust flow rate by changing fuel pressure.

While fuel injectors are rated at a 100% duty cycle, it is common practice to size the fuel injectors based on a 80% duty cycle. Since the flow rate is measured at a static fuel pressure on a new injector, and does not take into account the opening and closing of the injector, the 80% duty cycle maximum gives a factor of safety to account for actual driving conditions and a reduction in flow rate caused by deposits. This factor of safety is important because a lean fuel mixture will result in excessive heat and can potentially lead to engine damage.

On a related note, flow rates are based on fuel pressure and can be reduced with the buildup of deposits making it very important to ensure that the engine has a solid supply of fresh, clean fuel. One of the most common restrictions in the fuel supply system is a clogged or dirty fuel filter. As you upgrade your injectors to provide higher flow rates, it becomes increasingly important to replace your fuel filter regularly.

Impedance
Impedance, for which the generally accepted symbol is “Z”, is basically the measure of the electrical resistance of the electromagnetic coil that drives the injector. While, in the terms of electromagnetic physics, impedance in a bit more complex than that, there is no difference between resistance and impedance in DC (direct-current) circuits. To understand how impedance affects EFI systems, it is important to understand how a fuel injector works. It is basically an electromagnetic switch that, in the presence of a current, creates a magnetic field which moves a pintle/ball/disc away from its seat, thus opening the injector to allow fuel to flow.

Fuel injectors come in two varieties, low impedance (low-Z, 1-5 ohms) and high impedance (high-Z, 10-15 ohms). Typically injectors with larger flow rates (500cc/min and above) are low impedance and injectors with smaller flow rates are high impedance, but there are some exceptions like the high-impedance 630cc/min Siemens injector. If you are unsure of which type of injector you have, you can measure resistance across the terminals on the injector’s electrical plug.

It is very important to match the impedance (high or low) of your new injectors to the engine management system. Failure to do so could result in electrical damage to the engine control module or wiring harness. The fuel injector circuit has a constant power source, directly from the battery or fuse block, and the engine management controls the injector by applying a ground to the circuit, allowing current to flow. Current and resistance have an inverse relationship. That means, if voltage is constant, as the resistance goes down, the current goes up. That makes sense, considering the low-Z injectors use a much higher current than the high-Z injectors. If your engine control module is designed for a high impedance injector and you install a low impedance injector, the current is significantly higher than the circuit was designed for, which may burn out the transistor which controls the injection circuit. This can be remedied by adding resistors to the circuit, thereby reducing the current.

Connector Style
Fuel injectors come with a variety of different style electrical connectors, some of which are standard, and some of which are manufacturer (Nissan, Honda, GM) specific. On top of that, some styles have several different names for the same thing. The most common for VW/Audi applications are EV1/Jetronic/Minitimer and EV6/USCAR. While choosing the appropriate connector style will make installation easier, there are several companies that make adapter harnesses to convert from one style to another. It is also possible to get adapter harnesses made which have built in resistors for using low impedance injectors for a system designed for high impedance. Additionally, some plug styles (like the EVI) have several different types of retaining mechanisms for applications with clearance issues (24v VR6 comes to mind).

Spray Pattern
Spray pattern is one of the most overlooked fuel injector characteristic, but it is also one of the most important. The required spray pattern depends on the intake manifold design as well as the shape of the intake port on the cylinder head and the intake valve configuration. Engines with a single intake valve will generally require a narrow cone or pencil spray pattern, while multi-valve heads (the 20v 1.8t, for example) work better with a wide or split cone configuration. Some applications will benefit from an offset cone, which is similar to the narrow cone pattern, but fuel is injected at an angle directing it towards the back of the intake valve. As injector technology advanced, the pencil and v spray patterns pretty much became obsolete, as the narrow/wide/split cone spray patterns offered better fuel atomization, increasing efficiency and reducing emissions by improving flame propagation in the combustion chamber. Ideally, you will want the widest, most diffused spray pattern with the best atomization without spraying the walls of the intake manifold runners and intake ports. Fuel spraying on the walls of the runners/ports will condense, drip onto the back of the valve, and slowly run into the combustion chamber, resulting in imprecise control of the injection event and an inefficient burn . When choosing a fuel injector, choosing the correct spray pattern for your application can dramatically improve idle and cold start and reduce emissions and misfires.

Feed Style
There are three basic feed styles for EFI injectors. Rail feed injectors seat into a fuel rail and are sealed using an o-ring. This style of injector is used on all VW/Audi OEM EFI fuel systems. Rail feed injectors are also popular on domestic/American vehicles. Hose feed fuel injectors look similar, except they have a barb fitting in lieu of the top o-ring that seats into the fuel rail. Hose feed injectors are common on Japanese vehicles and other imports. Side feed or galley feed injectors are, as the name implies, fed through the side of the injector. With this setup, the injector seats into, and protrudes through, the fuel rail. The side feed configuration is also popular on some Japanese imports. All fuel injectors, regardless of feed style, should seal to the intake manifold or cylinder head (depending on application) with an o-ring at the lower end. The feed style for a specific application will be determined by the current fuel delivery system configuration.

Physical Dimensions
The physical dimensions of the fuel injector are a consideration for the ease of installation and the ability to “plug and play” when replacing. Injector length is a big consideration on rail fed injectors and is determined based on the mounting points for the fuel rail. It is possible to correct for discrepancies by using spacers or reworking the fuel rail mounting brackets. Injector diameter also becomes an issue if there are tight clearances on the bottom (outlet) end of the injector. One specific example on a VW/Audi application, the AEB 1.8t and 24v VR6 engines require clearancing when installing a 440cc Bosch Green Giant injector, which is a popular option when adding a big turbo. Most suppliers for high performance VW/Audi parts offer an option for machining the fuel injector to accommodate these applications, if required.

Conclusion
While there are many factors to consider when choosing a fuel injector, it can be a relatively smooth process provided you make sure you are getting what you need. Hopefully this article will help dispel some of the confusion and allow you to make an informed decision.

We offer a wide variety of fuel injection solutions, so feel free to contact us if you have any questions regarding fuel injectors or if you would like to place an order.